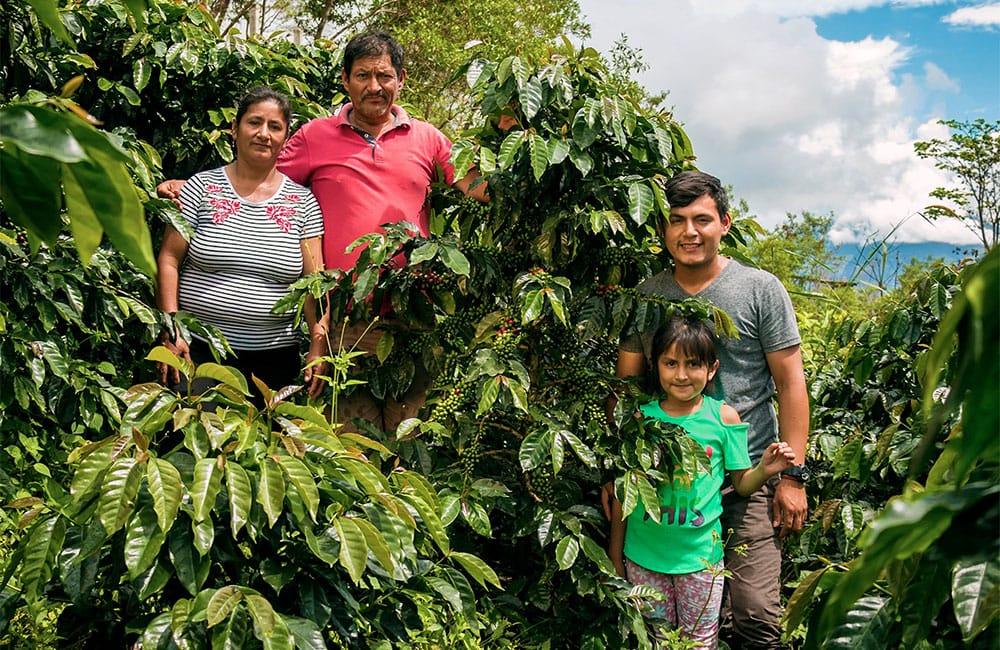 New specialty coffee from Perú with a purpose produced by women

We are particularly proud to support one of their innovative projects.

This certified Organic lot was produced by several Mujeres program members, all of whom are—fittingly—women. 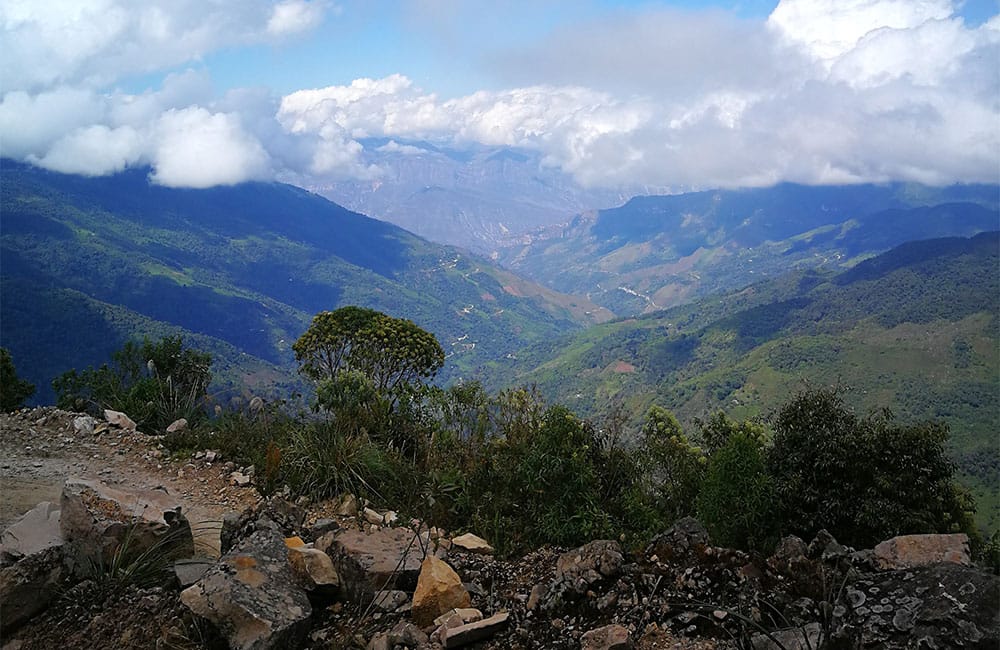 JUMARP a model for change

The Asociación de Productores Cafetaleros Juan Marco “El Palto” – in short, JUMARP – was founded in 2003 by José Carranza Barboza and 35 other smallholder farmers.

The association was born out of a desire to develop a new, producer-focused model for growing and exporting coffee.

To address this, JUMARP created the Mujeres program—named for the Spanish word for women.

The program works to improve social and economic standing for women members. 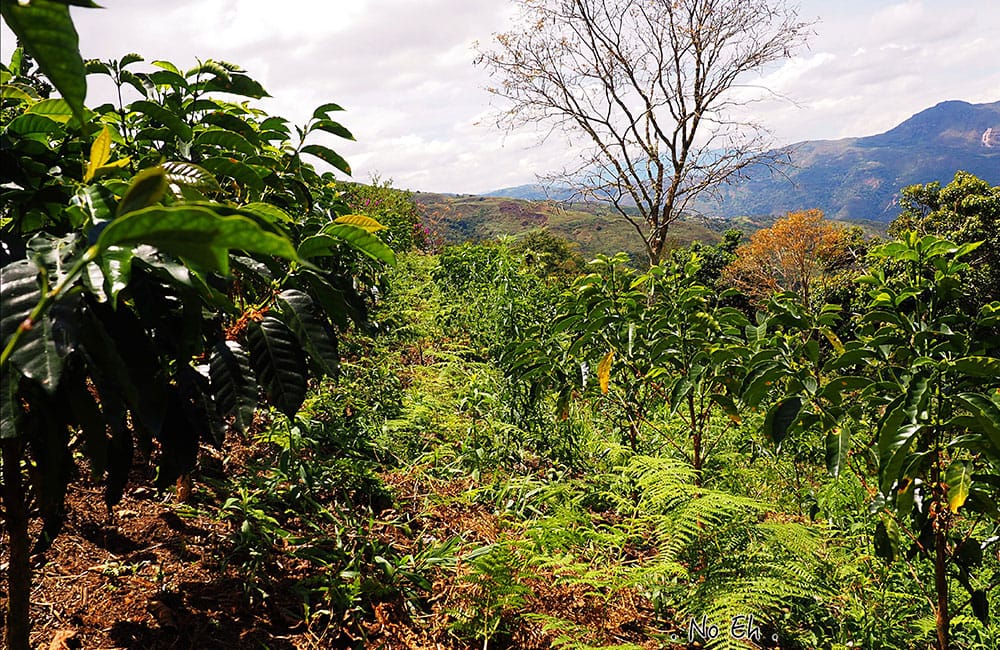 Making it happen for women

To increase women’s participation, they began by identifying barriers to women’s active participation and then started implementing steps to help women get more involved.

They also focus on bolstering self-esteem so women have the confidence to share their new skills in public settings and around men.

Participants also receive sensory training and learn to roast to help them sell their roasted coffee at a local market and to gain a better understanding of quality. 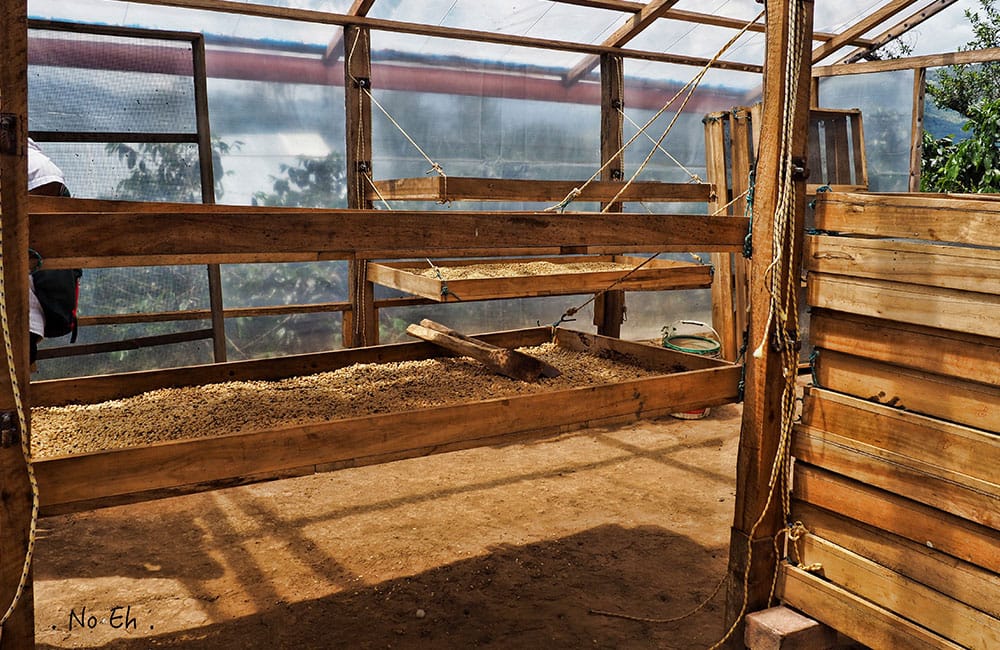 Across Peru, most smallholder producers use a similar household-based model of production.

Farm sizes are small, and most families pitch in together to contribute the work needed – from pruning, to weeding, to fertilizing – to bring in a successful coffee harvest.

Women are often significant contributors to household coffee production, but their labor is frequently overlooked, which the Mujeres Program is working to change.

During the harvest season, coffee is selectively handpicked. This labor-intensive process usually involves the entire family.

Some larger farms may hire local day laborers to help with harvest. 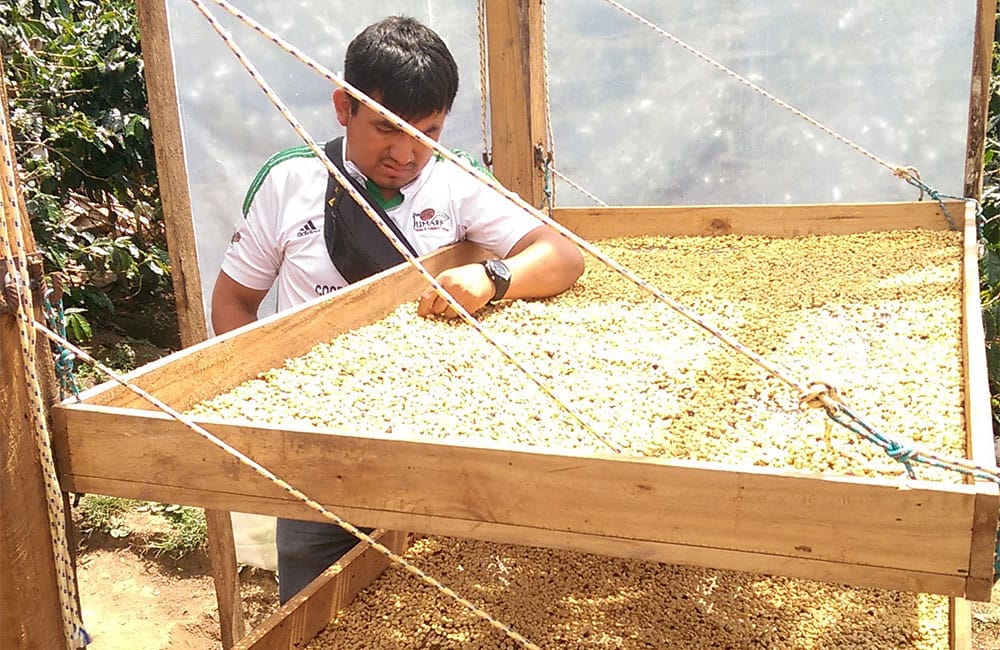 After harvesting, cherry is often hand-sorted to remove damaged or under ripe cherries and is sometimes (depending on the family’s processing setup) floated in buckets or plastic vats to remove underweights. After sorting, the cherry is pulped.

Most families have a mechanical or manual drum pulper located on their farm, usually close to the house.

Once pulped, coffee is fermented in a tank for at least 18 and up to 40 hours depending on the climate (higher altitudes often require longer fermentation times due to cooler air temperatures).

Some farmers use covered raised beds and others have a ‘carpa solar’ – a raised drying room, often above a storage shed or even their home.

Parchment will dry for around 20 days on average and, no matter the drying method, will be turned regularly to ensure even drying. 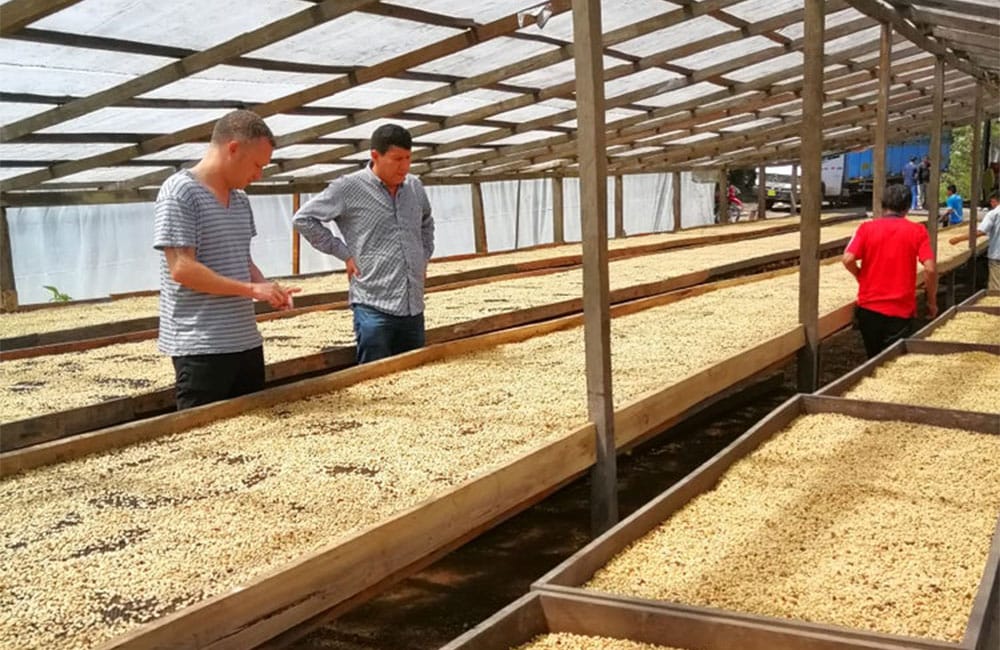 Together, we aim to support them in the fantastic work they are doing to increase coffee quality, spread organic farming practices and strengthen gender equality in their communities.

Committed to buying JUMARP’s coffees through thick and thin, even when harvests are difficult.

As a result, JUMARP members are able to depend on a certain level of income from their coffee year in and year out.

These dependable incomes help ensure the longevity of their coffee quality and community improvement projects. 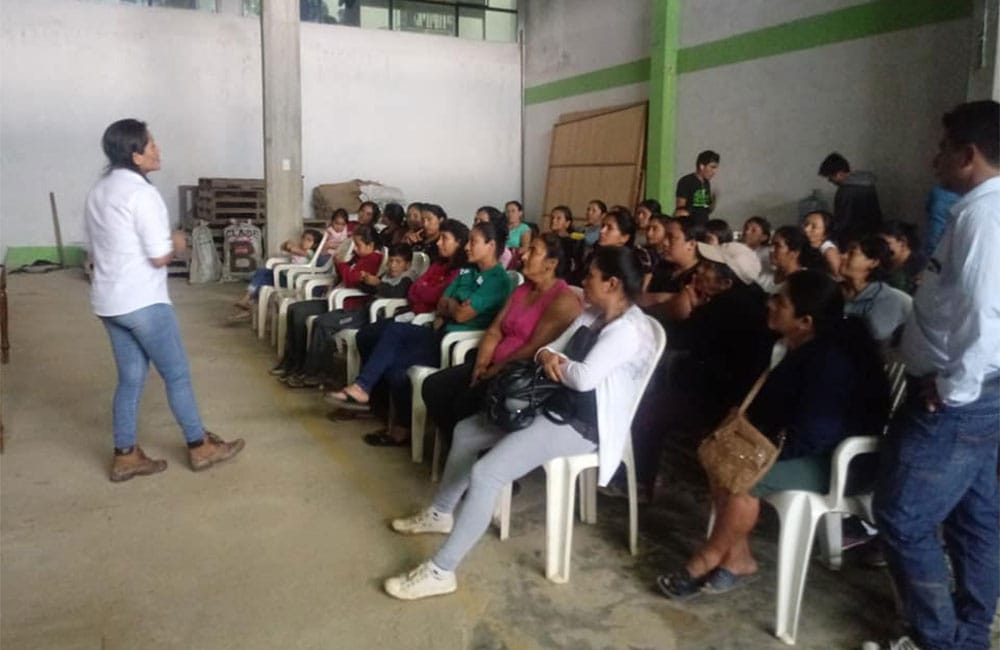 The cooperative invests the premiums received from these certifications in a number of important community projects, including crop renovations, a fund for education programs and the construction of schools.

One program we are particularly excited to support is their ambitious quality improvement program, which launched in 2012.

Funded by Fairtrade and Organic premiums as well as through government funding and member contributions, the program aims to raise general overall cup scores to 85-86 by 2021.

They’re already well on their way to addressing coffee quality at all stages of the production process.

With these tangible steps towards their goal, we’ve seen marked improvement in their coffee quality since the initiation of the program.

We look forward to continuing to support them as they reach their goals and produce higher and higher quality coffees. 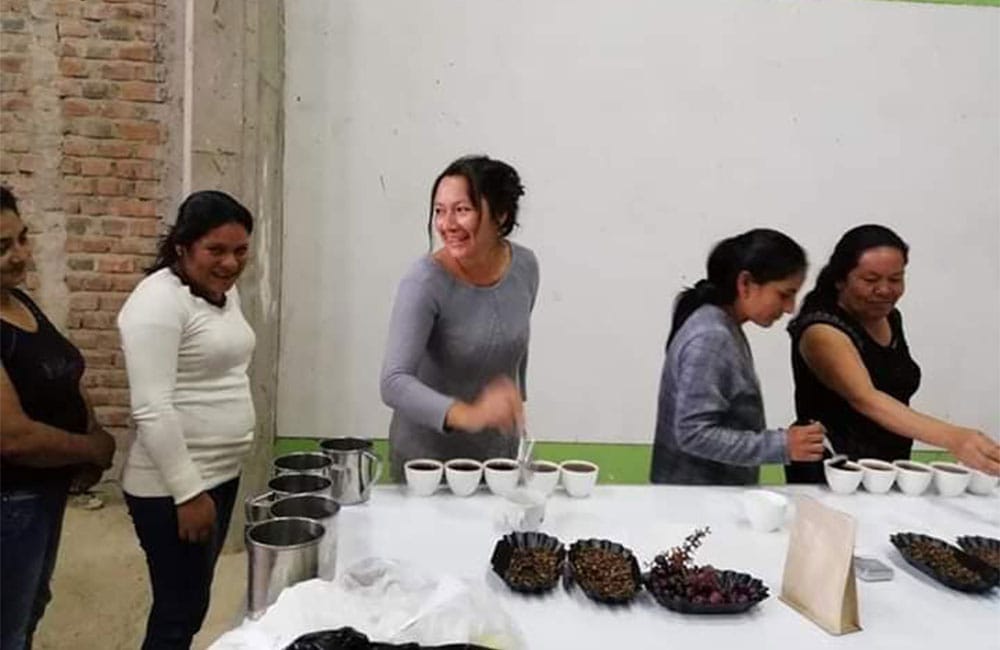 Peru holds exceptional promise as a producer of high-quality coffees.

The country is the largest exporter of organic Arabica coffee globally.

Though coffee arrived in Peru in the 1700s, very little coffee was exported until the late 1800s. Until that point, most coffee produced in Peru was consumed locally.

When coffee leaf rust hit Indonesia in the late 1800s, a country central to European coffee imports at the time, Europeans began searching elsewhere for their fix.

Peru was a perfect option. Between the late 1800s and the first World War, European interests invested significant resources into coffee production in Peru.

However, with the advent of the two World Wars, England and other European powers became weakened and took a less colonialist perspective.

When the British and other European land owners left, their land was purchased by the government and redistributed to locals.

The Peruvian government repurchased the 2 million hectares previously granted to England and distributed the lands to thousands of local farmers.

Many of these farmers later grew coffee on the lands they received. 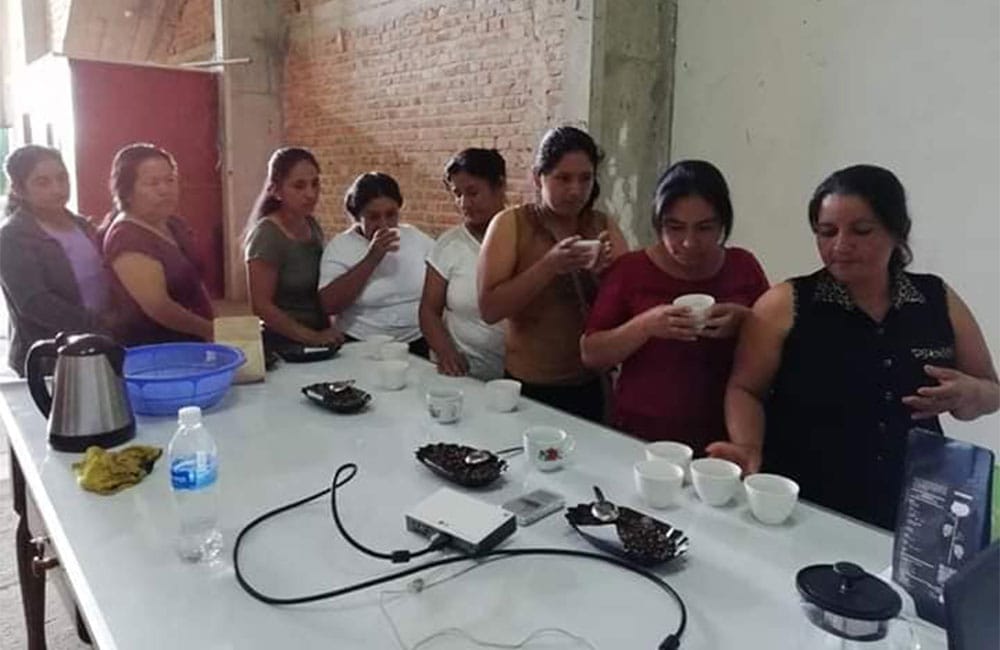 Farmers in Peru usually process their coffee on their own farms.

Most coffee is Fully washed. Cherry is usually pulped, fermented and dried in the sun on raised beds or drying sheds.

After drying, coffee will then be sold in parchment to the cooperative. Producers who are not members of a cooperative will usually sell to a middleman.

The remoteness of farms combined with their small size means that producers need either middlemen or cooperatives to help get their coffee to market.

Cooperative membership protects farmers greatly from exploitation and can make a huge difference to income from coffee.

Nonetheless, currently only around 15-25% of smallholder farmers have joined a coop group.