The origin of coffee, history and legend 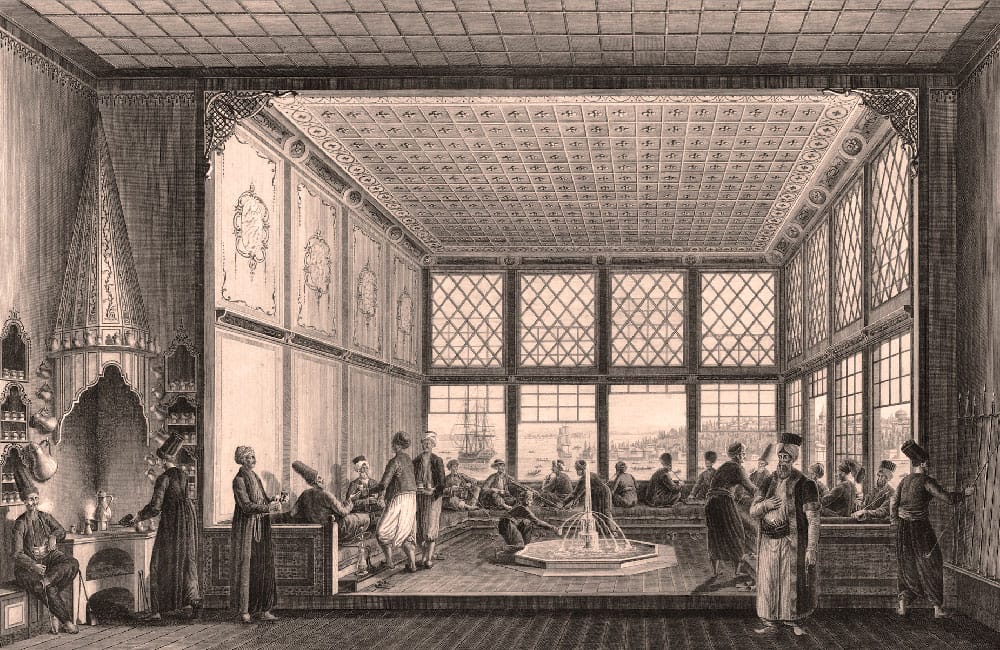 The origin of coffee, history and legend

The philosopher’s stone, the Opus magnum of the alchemists, the legendary substance that everyone was looking for, capable of turning lead into gold and granting eternal youth to whoever obtained it, is a legend with a mystical foundation.

The history of the coffee origin shares similarities with that tale, since many legends attribute the discovery of coffee to Muslim mystics who followed the path of Sufism.

And, like the philosopher’s stone, coffee gives youth to those who drink it, even if it is only for a short period of time: that in which the active chemical compound of coffee, caffeine, stimulates the central nervous system.

But not because of its legendary flare, the history of the coffee origin is less exciting, because there is no legend which is not based in historical reality.

The first written mention of coffee 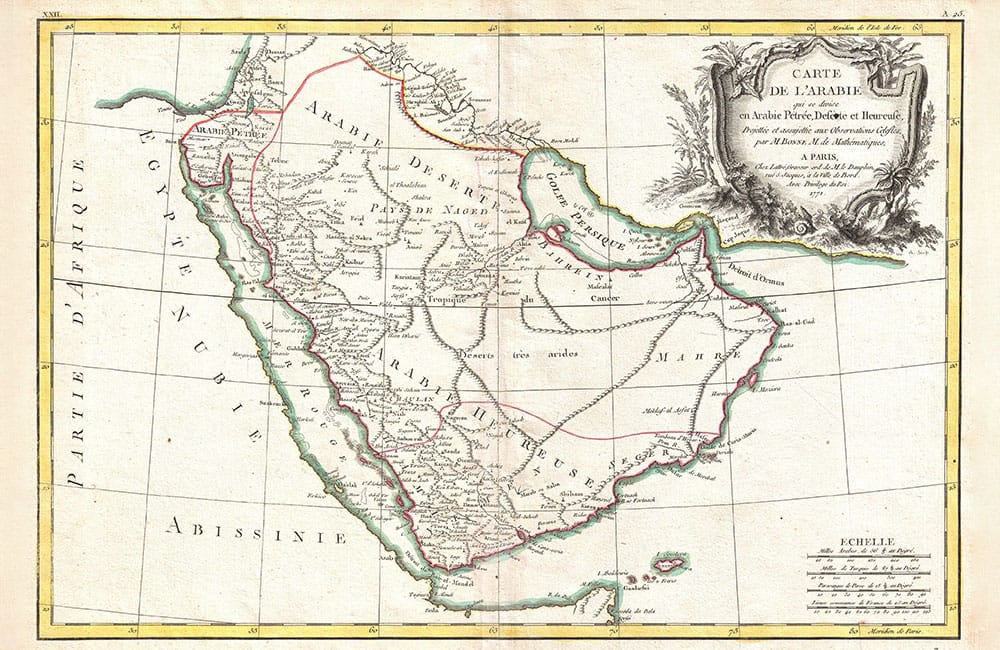 Ancient map of Abisinia and Yemen
It is very likely that coffee cultivation began in the Harar Valley, in Abyssinia (modern Ethiopia and Eritrea), around 575 AD. The inhabitants of this place consumed the coffee berries mixed with animal fats as an energizing food.

But the first written mention of coffee we find is by a Persian scholar, physician, philosopher and historian, Ar-Razi, from the 10th century. In addition to talking about coffee, this scholar is credited with the discovery of sulfuric acid, ethanol and great contributions to medicine and philosophy.

The oldest story, although without historical basis and without having been accepted by the Muslim scholars who have verified the transmissions of the Prophet Muhammad’s life, is that coffee was given to this Prophet by the Archangel Gabriel as a drink “as black as the Kaaba in Mecca” and “giving strength enough to knock forty men off their horses”.

Although this legend is probably false, it gives us a clue about the origin of coffee: by the 10th century it was already a well-known drink in the Arab world.

The Legend of Kaldi the Shepherd 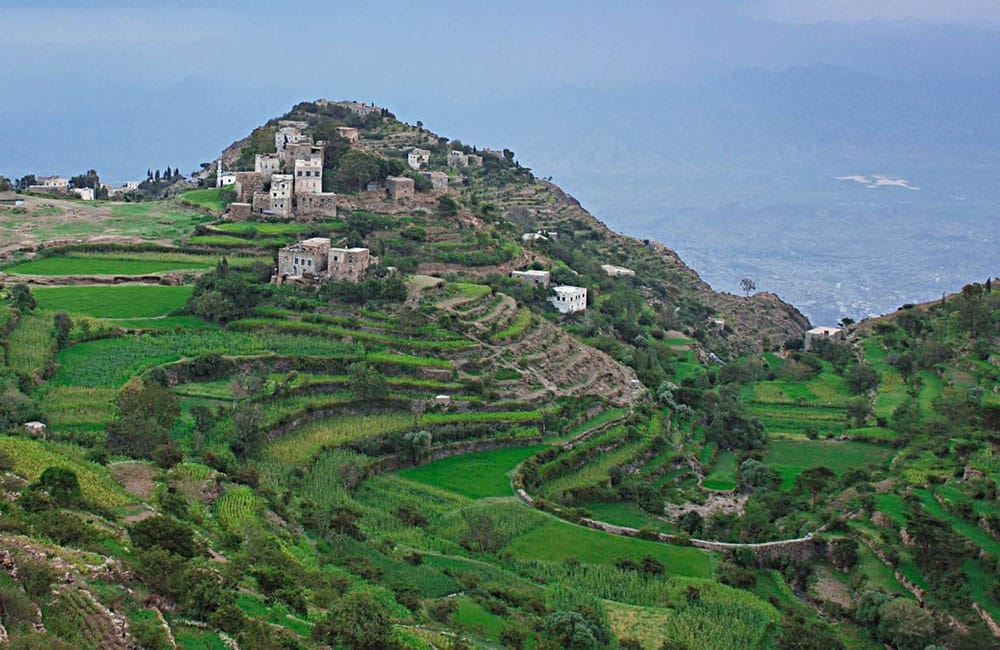 Coffee plantation in Yemen
One of the best known legends about the origin of coffee is that of the shepherd Kaldi, who grazed his goats in some hills of Abyssinia on the shores of the Red Sea and near a monastery.

Kaldi observed that his goats ate from a bush with red berries and that, having eaten the berries, they began to jump excitedly. Kaldi told this to one of the monks who went with him, observed the behavior of the goats and picked some of these berries.

The monk tried various ways of consuming the berries, until he found a recipe: he roasted and ground the seeds and made an extraction with water; and this is how it has been kept to this day.

As a result of this brewing, the monks were more alert during the waking nights doing their prayers.

This gives us another clue: the place where botanists have traced the origin of this plant is Ethiopia. From this, shortly after, it went to Yemen.

The story of the scholar and physician Ali bin Umar 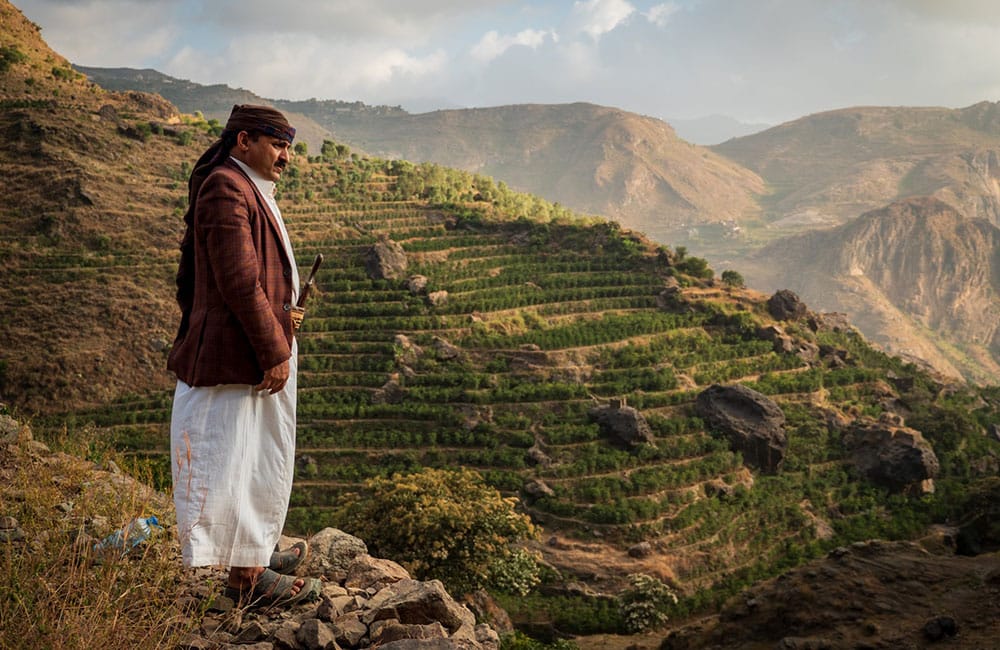 Yemeni man in front of coffee plantation
Another legend about the coffee origin is attributed to a mystic, scholar and physician, Ali bin Umar, from Yemen.

This scholar and physician was banished from Tarim to the mountains of Yemen because of a false accusation. In the mountains he discovered a plant with white flowers and red berries.

Ali bin Umar observed the behavior of the animals after eating this plant -they got excited and reared-. After seeing that it did not harm them, he decided to make a brew with it.

After several experiments he arrived at the brew that we know today as coffee, made with the seeds. He liked its taste and its effects so much that shortly after he undertook the pilgrimage to Mecca and took with him this plant’s seeds.

Once in Mecca he encountered an epidemic and used coffee along with other plants to cure the sick.

As a reward for his services he was forgiven and he was able to return to Tarim, after which this drink became popular all over Yemen.

The probable journey of coffee 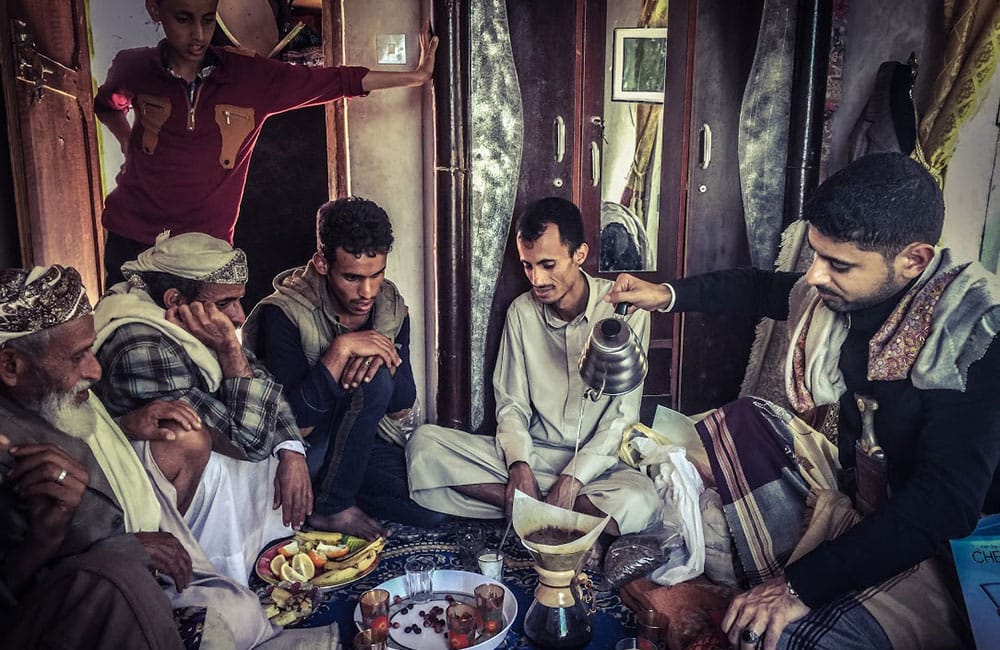 Group of Yemeni men sharing coffee
From this legend we get more clues to trace the journey of coffee. The coffee plant is native to Ethiopia, where it was probably consumed as a food, but not as a drink. From Ethiopia it jumped to Yemen arriving first at the port of Mocha and from there it spread throughout the Arabian Peninsula.

The way in which it spread was already as a drink, so we can say that the current coffee drink originates in Yemen, although the plant was indigenous to Ethiopia.

And the way in which it spread throughout the Arabian Peninsula, and later throughout the Muslim world first and then to the West, follows another legend.

The drink of the Sufis 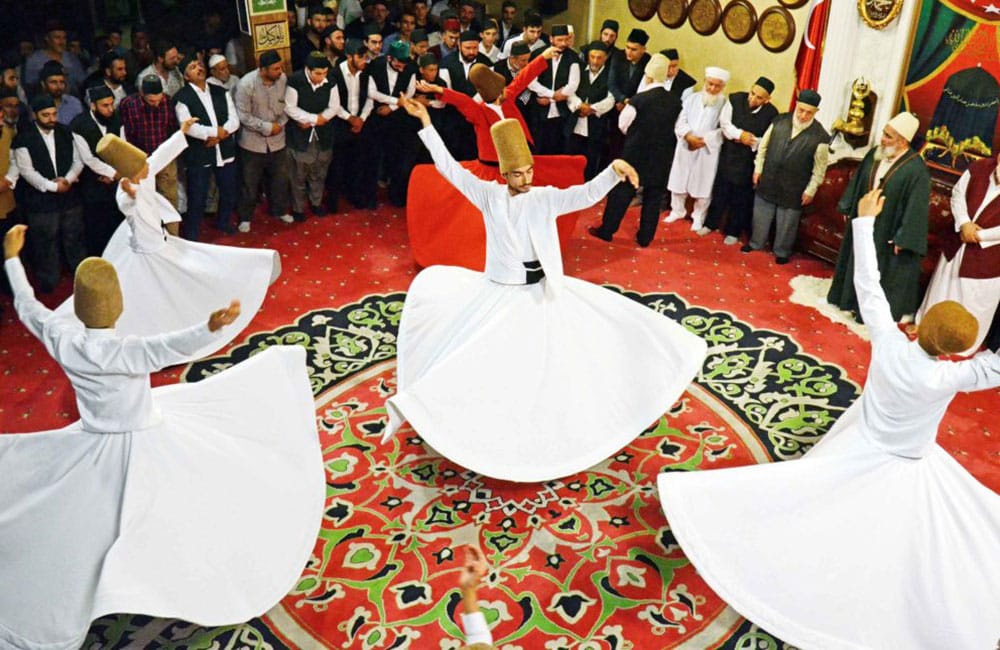 Sufi group from the Mevlevi Tariqa in Turkey
It is said that it was a Shaykh (master) of a Sufi Tariqa (spiritual path) who offered this drink to his disciples to keep them awake during the long nights of Dhikr (invocations remembering God).

This teacher was Abu Hasan Al-Shadili, a well-known 13th-century Moroccan scholar. He observed some birds that had a lot of vitality after eating some berries while traveling in Ethiopia.

After tasting these berries he felt the same vitality and gave them to his disciples.

This drink became popular among Sufi Muslims as a stimulant for spiritual work and it was them who spread it throughout the Muslim world through their gatherings.

Once again, we see that the legend tells us part of the truth: that the coffee drink spread from Yemen to the Arabian Peninsula and from there first to the Muslim world and then to the West.

Get to know our accessories and visit our shop

Controversy over coffee in the Muslim world 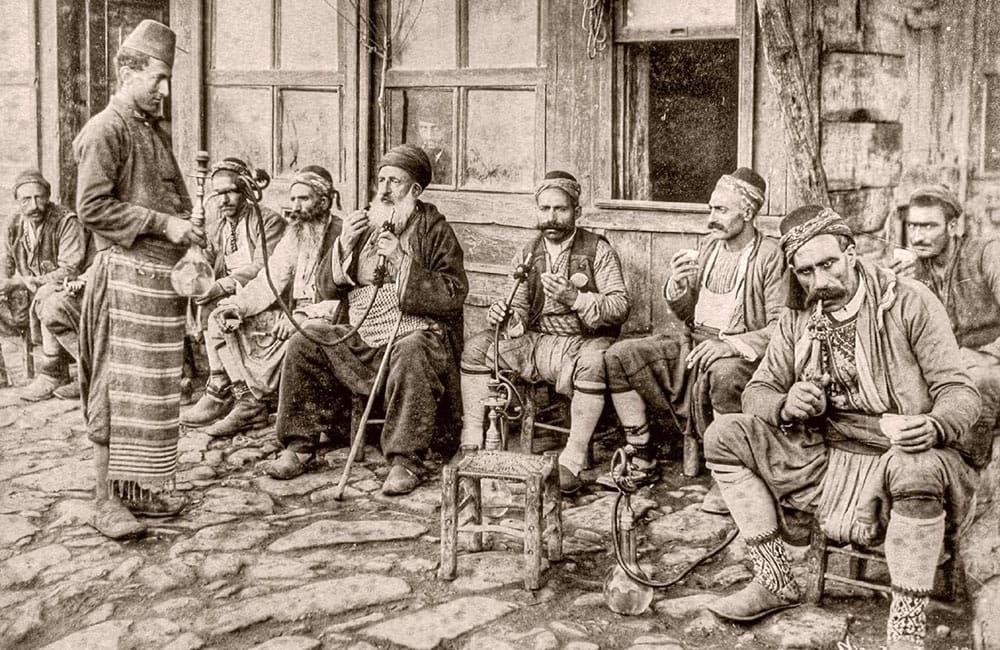 Old picture from a café in Cairo
But coffee did not always enjoy a good reputation among all Muslims.

A translation of an Al-Jaziri manuscript traces the spread of coffee from Arabia Felix (present-day Yemen) north to Mecca and Medina. From there, and following one or more of the stories we have discussed previously, it spread to the larger cities of Cairo, Damascus, Baghdad, and Constantinople.

Associated with Sufism, many places were established where coffee was consumed in Cairo around Al-Azhar University. Similar cafes also opened in Syria, especially in the city of Aleppo, and then in Istanbul, the capital of the Ottoman Empire, in 1554. 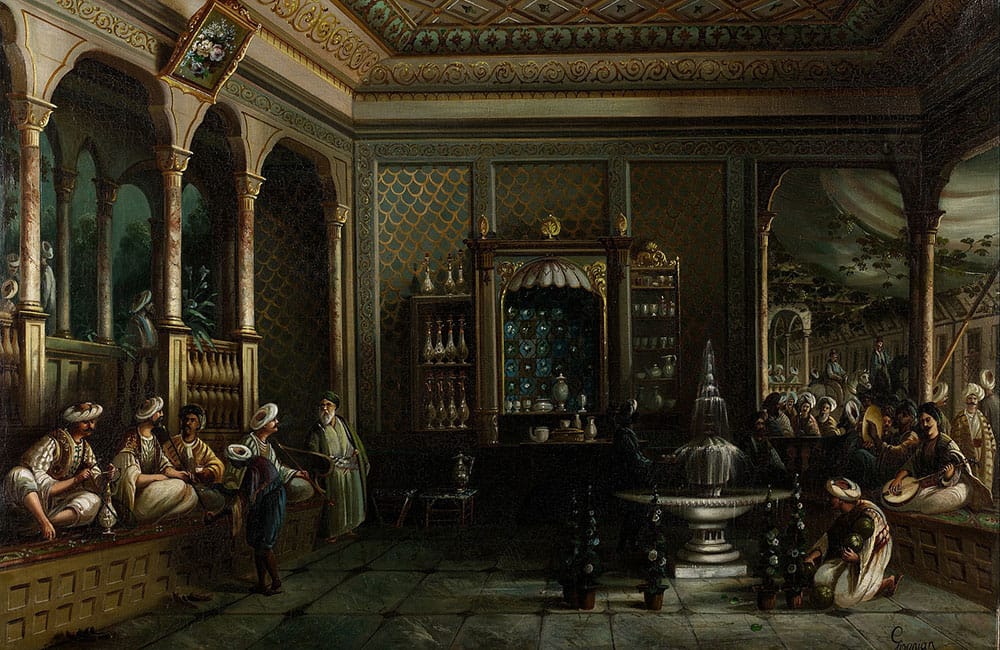 Old café in Istanbul dating back to Ottoman period
Coffee was prohibited by some imams in Mecca in 1511, under the justification that it was an intoxicant like alcohol, although it had a milder effect.

As we well know, religion is often used to justify political needs, and this may have been one of those occasions. The reason for the ban seems to be that in these cafes the political opponents of the authority of the moment met to talk about politics and other issues of social discontent of the moment, creating instability and simmering future and present revolts.

Coffee and the places where it was drunk were also banned in Cairo in 1532, which only supports this hypothesis that it was not so much a religious issue as a political one.

The Ottomans rejected the judgment that coffee was an impermissible drink for Muslims in 1524 by order of Sultan Suleiman I and Grand Mufti Mehmet Ebussuud el-İmadi.

The arrival of coffee in the West 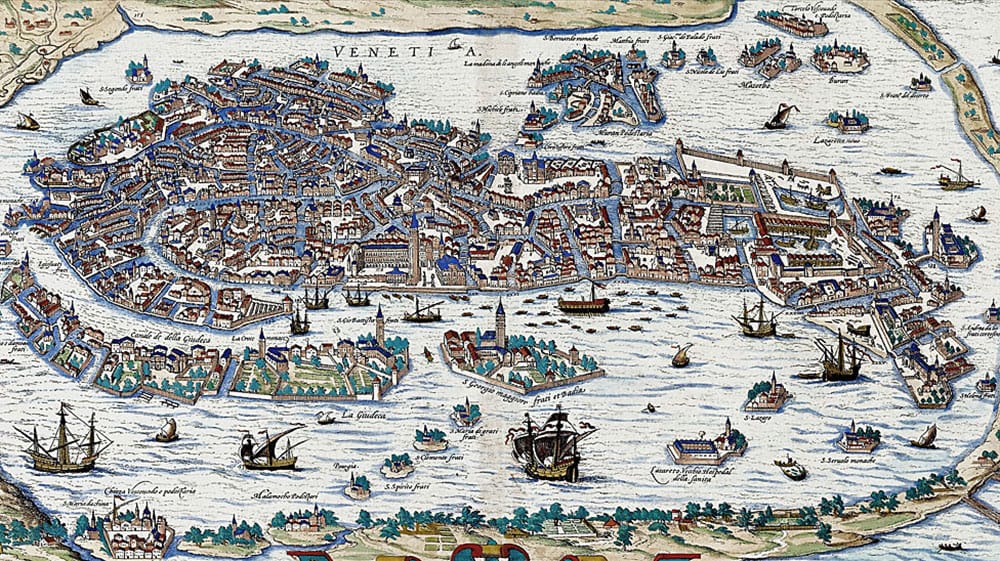 Illustration of ancient Venice
What the 1511 ban and its subsequent revocation tells us is that coffee was a very popular drink throughout the Muslim world. Enough to deserve the attention of scholars, mystics and sultans.

Before the ban coffee was already very popular, and, once it was revoked, the places to drink coffee multiplied. It became so popular that around the 16th century, and as a measure to control the coffee market, it was prohibited to export coffee seeds that could germinate outside the borders of the Ottoman Empire.

Another legend says that it was Baba Budan, a Muslim pilgrim from India who went to Mecca, who secretly took seven seeds back to his country around 1600; and that it was in Mysore -the pilgrim’s home- that coffee was grown outside the Arabian Peninsula and Ethiopia for the first time.

In 1615 Venetian merchants brought coffee from Mocha to Europe, which started a lucrative business for the Arabs who guarded this precious seed with even more zeal.

But once coffee was out and being such a lucrative business, it was only a matter of time before the custom of drinking coffee would be established in the West and its cultivation would spread around large tropical areas of the planet.

But that’s another story…

Bennett Alan Weinberg, Bonnie K. Bealer. “The World of Caffeine: The Science and Culture of the World’s Most Popular Drug”. Routledge, 2004

Jeanette M. Fregulia. “A Rich and Tantalizing Brew: A History of How Coffee Connected the World”. University of Arkansas Press, 4 mar 2019.