Cyato a specialty coffee from Smallholders in Rwanda 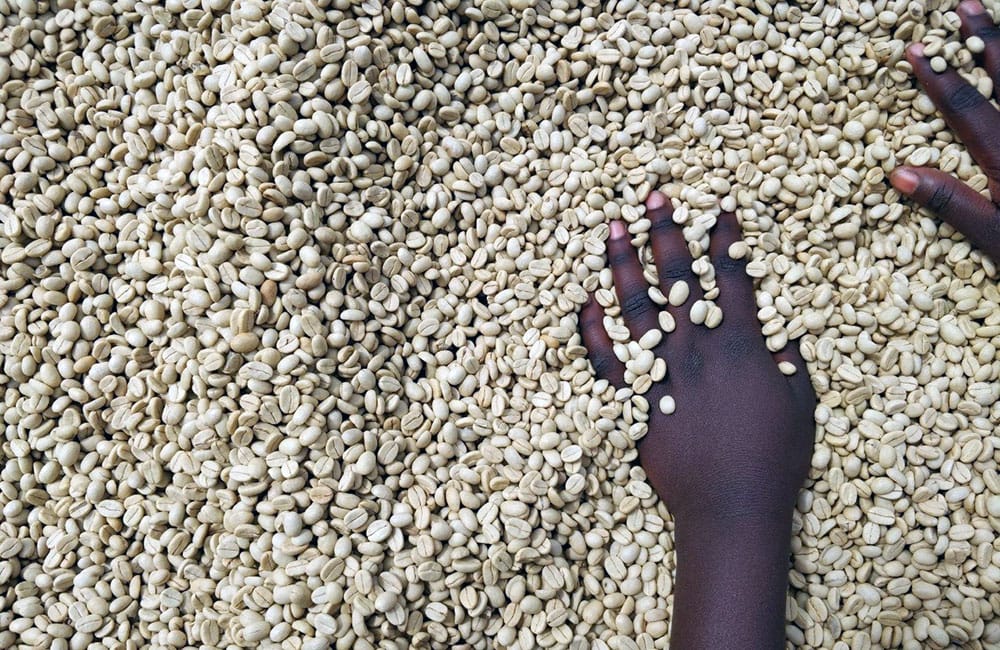 Cyato a specialty coffee from Smallholders in Rwanda

Cyato is the name of a washing station in the Nyamasheke province, in the western part of Rwanda.

Cyato has an exceptional location: it is close to Lake Kivu and in the Nyungwe rainforest, one of the oldest in the central Africa.

This washing station processes the coffee from about 25 small family plantations, which usually have more less than half a hectare and about 250 or 300 coffee trees per farm. 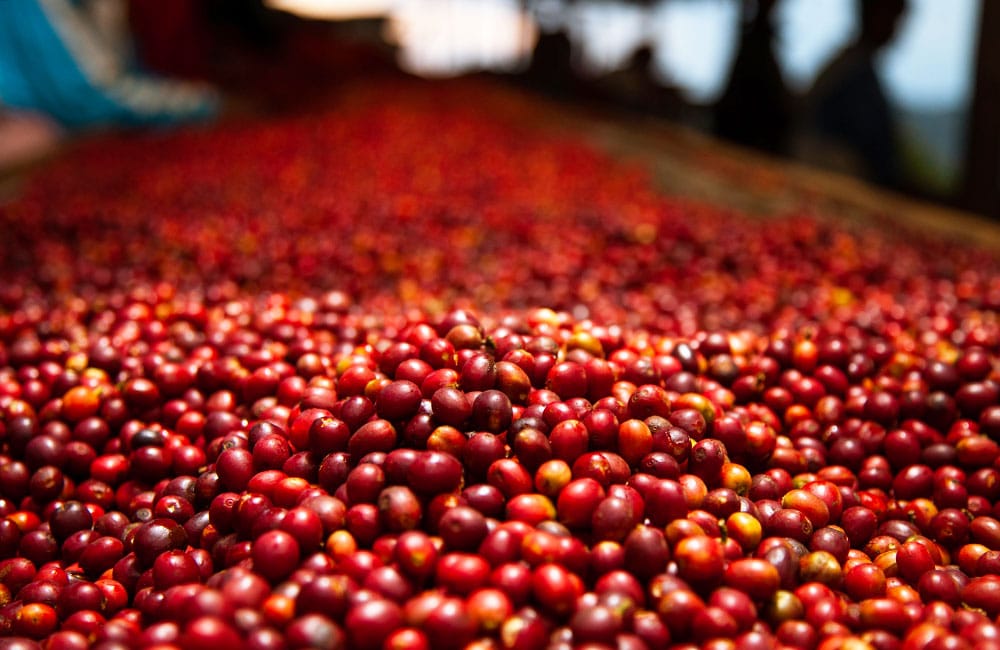 The ideal conditions for growing coffee

Cyato is located in an exceptional enclave for coffee cultivation.

The Nyungwe rainforest and the proximity of Lake Kivu ensure a rich ground full of nutrients for the coffee.

The altitude and proximity to the lake, as well as to the jungle, make the climate mild and constant throughout the year, with an average between 22 and 25 degrees.

These conditions also create an ideal habitat for a wide variety of fauna and flora, which contributes to a better harvest. 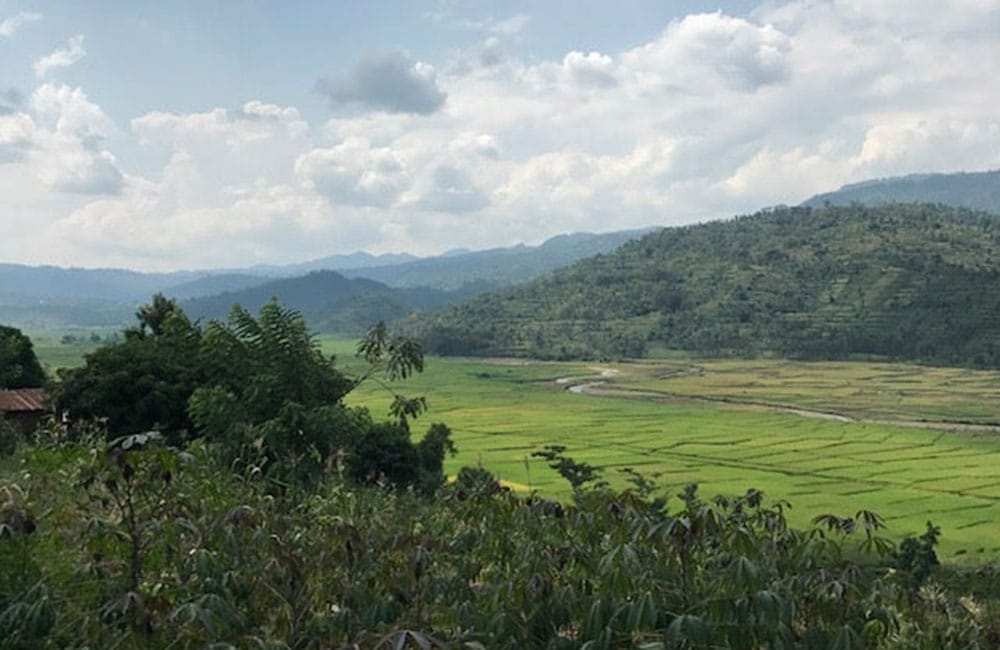 In this area, the use of pesticides and chemicals in crops is avoided and instead the quality of the land and the know-how of the farmers are trusted.

In addition, something that makes this coffee almost unique is that plant pollination occurs naturally through the work of wild bees.

In fact, there has been close to a 50% increase in crop yields thanks to the work of bees. 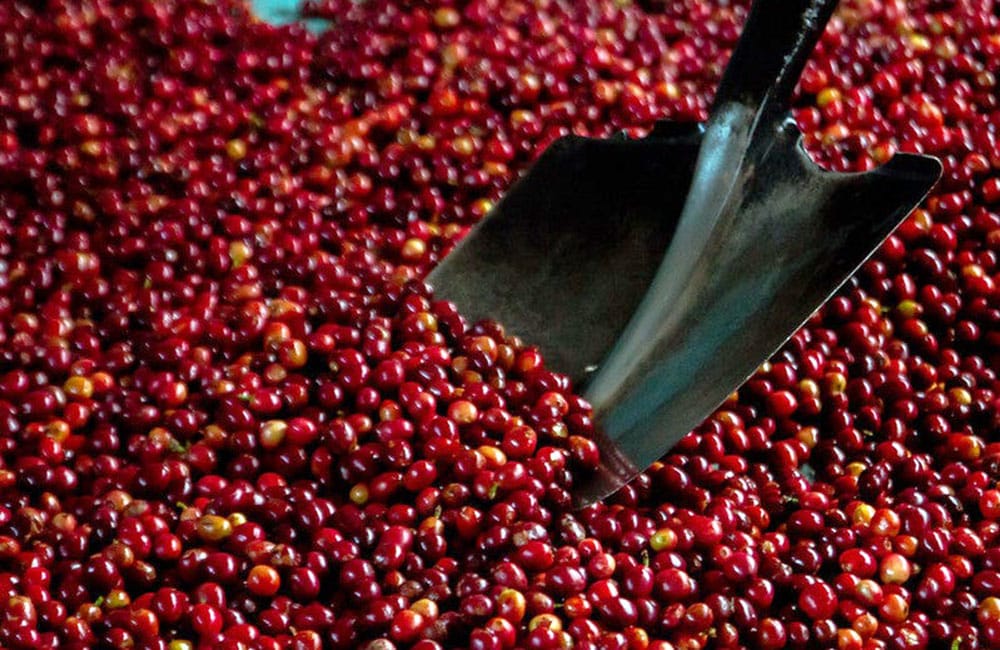 A coffee pollinated by bees

Every day we learn more about how bees and other pollinators are essential actors in food production.

They play a huge role in growing food around the world.

The impact of bees on coffee production had never been noticed or considered until relatively recently.

We now know that during pollination bees leave vital microorganisms on coffee plants, giving them a more consistent size and better flavours.

Coffee processing at the Cyato station

The farmers – mostly small family plantations – select the cherries by hand to ensure ripeness and then take it to the washing station in Cyato.

Upon reception, the cherry is sorted to remove any unripe or damaged cherries and pulped in the station’s pulper.

The coffee ferments for 12 to 24 hours before being washed in clean water.

The coffee beans are then moved to raised beds to dry.

The seeds are moved frequently to ensure even drying. Drying takes approximately 10 to 20 days.

The result is a washed coffee with notes of peaches in syrup, rooibos and vanilla. 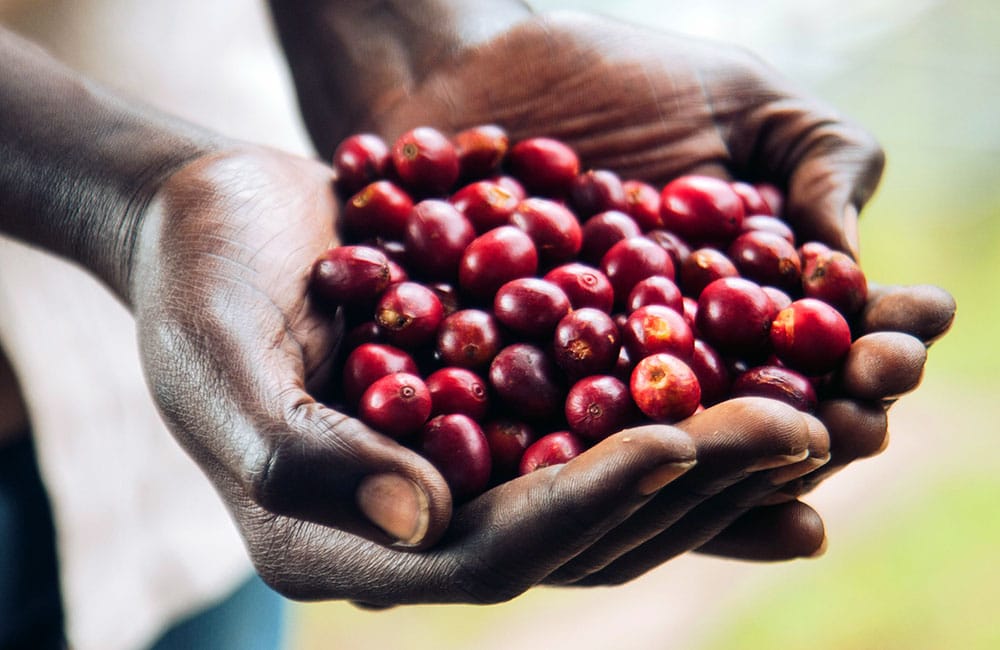 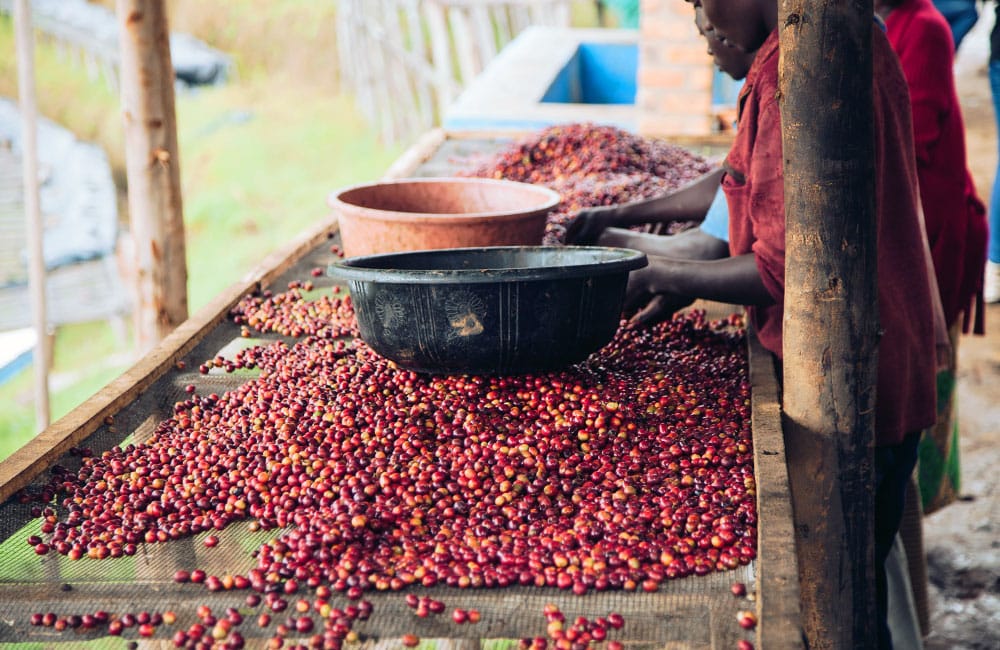 The coffee farmers around Cyato

In Rwanda the coffee industry is dominated by small plantations.

There are no large coffee plantations in the country and the vast majority are small family farms of no more than a quarter of a hectare.

Coffee cultivation is the main source of income for many families, who also grow other plants such as corn or legumes.

Usually,  farms also have animals such as goats and chickens whose manure is used as fertilizer.

The most cultivated variety in this country is the Red Bourbon. 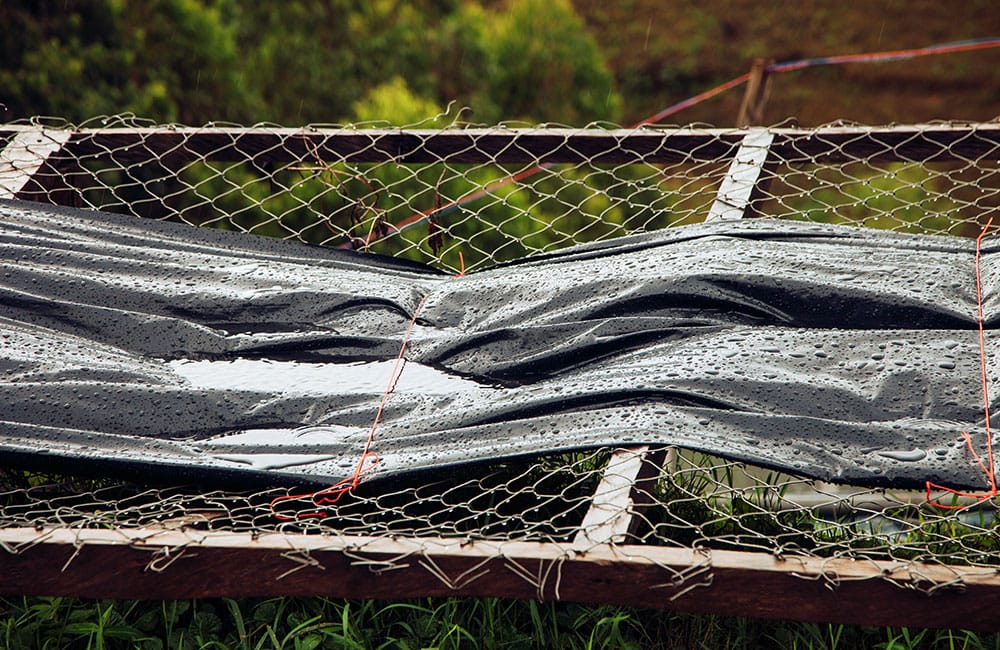 The role of coffee in the reconstruction of Rwanda

Coffee was introduced as a crop in Rwanda in the early 20th century.

By 1970, coffee had become Rwanda’s most important export, accounting for 70% of total export earnings.

Coffee was considered so valuable that, starting in 1973, it became illegal to pull coffee trees out of the ground.

But the breakdown of the International Coffee Agreement between 1989 and 1990 followed by the civil war and genocide of 1994 led to the total collapse of coffee exports and end of a vital income in USD.

The incredible resilience of the Rwandan people is evident in the way the economy and stability have since being recovered.

Modern Rwanda is considered one of the most stable countries in the region.

Since 2003, its economy has grown between 7 and 8% per year and coffee production has played a key role in this economic growth. 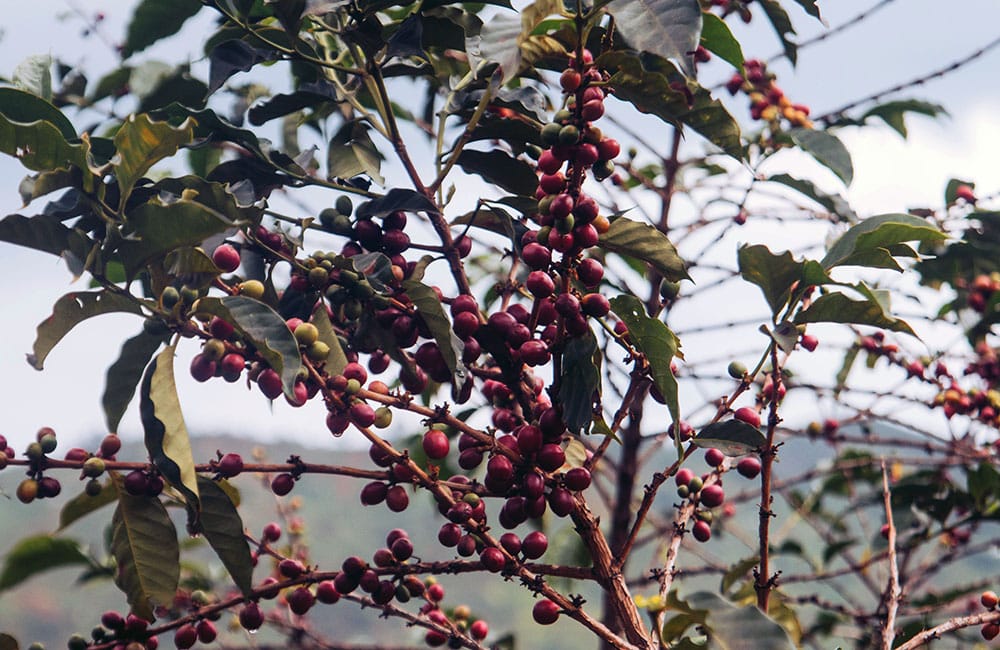